Curly and Bee Try to Keep the Eternal Flame Alive 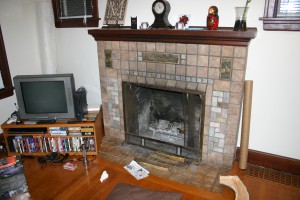 lovely turn of the century home has a beautiful mosaic fireplace. We were excited to build a fire in the winter, and obtained some firewood for such occasions.

However, our first attempts were thwarted – we couldn’t even get a fire started. Now, let it be known that these two individuals have had ample experience and success in fire-building. So, why couldn’t we get a fire going in our own fireplace? Then all we got was an awful lot of smoke filling the house. Not really the desired outcome. We decided it would be better to remove the offending log, than to let it continue to smoke in the house. Do you know how long it takes for the smell of smoke to leave a house? Weeks. 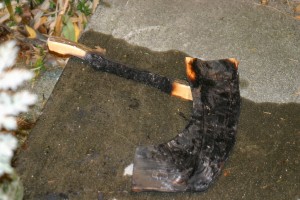 After some research, Bee discovered two things. One, the dimensions of the fireplace are not optimal (i.e. it was built wrong). Two, the house maintains a negative pressure. So, when you open the flue air is sucked into the house, instead of the smoke being sucked out of the house. Since the house already reeked of smoke (and Bee wanted to test his new-found theories out) he set out one day while Curly was at work to make fire…(while the wife is away the cave-mans play).

First off he corrected the dimensions of the fireplace by duct taping a sheet of aluminum foil to the top-front of the fireplace (thereby shortening the height dimension), next he opened the front door to relieve the pressure issue. Finally he primed the flu by burning a few sheets of paper in it. Then with great gusto he made fire. Happily his theory worked and the fire was soon very hot and happy. Once he had it going for a while he removed his foil and shut the front door. Success!