We ate a very large breakfast at a delightful little neighborhood café, after which we went back to the car to drive off and do some stuff. Since we would be embarking on a long journey the next day, we thought it would be a good idea to let Curly drive Bee’s car (she had only driven it once…briefly…before this point in time). Much to our surprise the seat motor appeared to be broken so with great glee Bee got to work on his car for the majority of the day (he loves to work on his car!). It turned out that the power cables going to the motor were stressed due to the seat being moved up and down so he lengthened the cables and then adjusted their position so that they would be out of the way. Needless to say, this was not how Curly wanted to spend her first full day of married life. However, the seat was fixed, which meant that we could switch off driving on our honeymoon.

The next day we began our first trip as a married couple. A friend of the family had given us a honeymoon in Tofino, Canada (on Vancouver Island) and so with passports in hand we set off for the great white north. Since all trips in foreign lands are wont to have some form of embarrassment, our trip decided to get this formality out of the way early. When we parked and waited for the ferry Bee thought that he was merely parked upon a speed bump. Little did we know that we were in fact parked upon a speed bump/crosswalk.  This first Canadian experience put some color in our faces as dozens of the locals expressed irritation and disbelief that anyone would park on a crosswalk (“…the crosswalk is even raised up off the ground so if you didn’t see it you will feel it…I mean come on, who is that oblivious?”). Photo evidence will prove that had we tried, it would not have been possible to park more perfectly in the crosswalk. 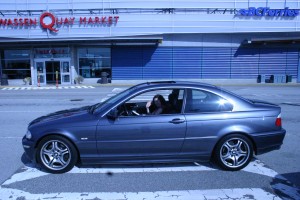 The ferry ride was quite fun and we saw a singularly unusual change in the water about half through the trip. 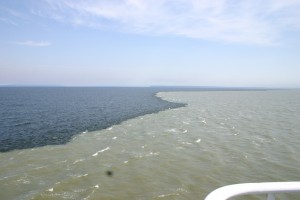 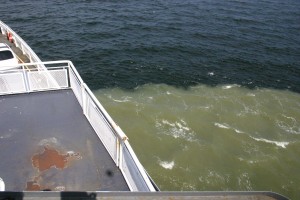 The drive from Port Alberni to Tofino is the most wonderful drive! It is twisty and windy with fantastic views. It’s a two lane road that winds through the forest with hills, mountain lakes, and tunnels. So much fun to drive, especially in Bee’s car! No doubt it was the fantastic driving that got us to Tofino earlier than expected. The beach house was fantastic! 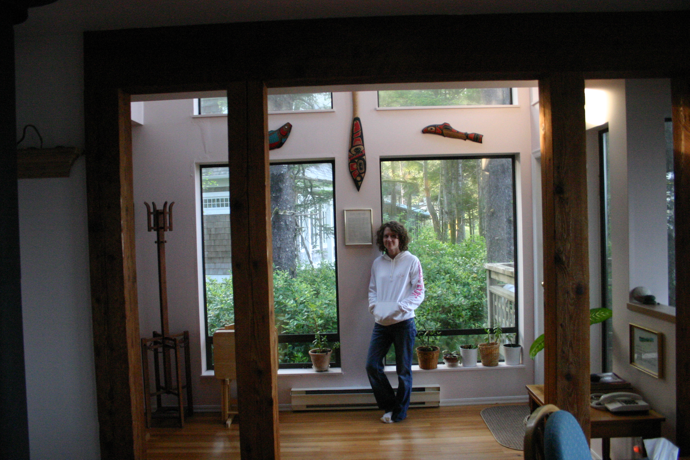 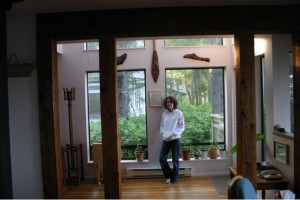 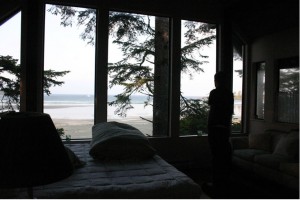 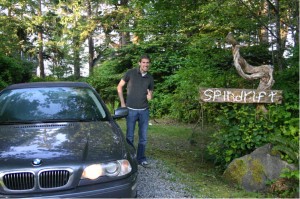 The house was on a nice quiet beach (http://www.spindrift-tofino.com/home.htm). We had a fully stocked kitchen and the local Co-op was just a few minutes drive down the road. Mornings greeted us with local surfing classes (we just watched from our bedroom windows) and beautiful weather. In the evenings the moon lit up the ocean to a silver brilliance while the fire in the fireplace warmed our backs and our eyes gazed at the vast expanse of stars. The house was also situated very close to a national park that was full of trails and beaches. Our days consisted of exploring these paths and drinking in the local beauty. We were quite surprised at the vast diversity of the landscapes in this park.

We first explored the beach in front of the house. It was composed of very hard packed sand that had an interesting texture. Along the water break line there were also large amounts of driftwood which had perfectly smooth surfaces with intricate patterns engraved in them. 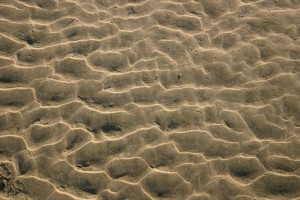 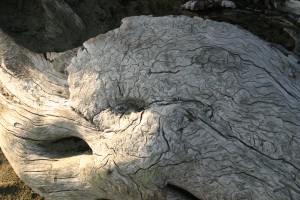 There was one very large branch that just begged to be climbed up on. 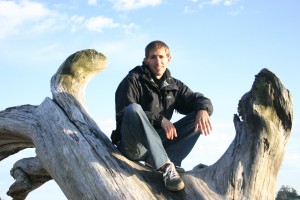 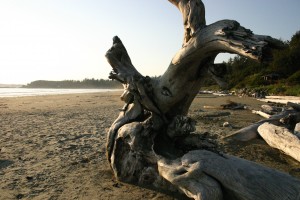 The next trail we went on took us to an old-growth area that had many “nurse logs” in it.  Curly thought these where quite interesting to look at. 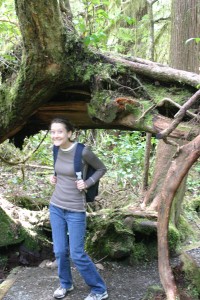 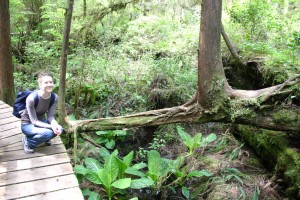 The bog was the most fascinating place for us. We expected some sort of smelly, wet and nasty place, but what we found was a large area covered in about a foot of thick moss with short bonsai-esque trees. It was quite beautiful, even though the pictures don’t do it justice. 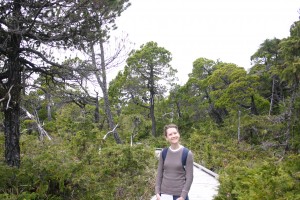 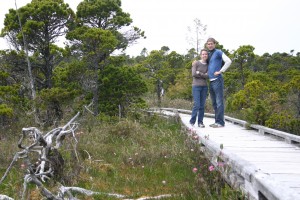 The only issue was a lack of useful directions… 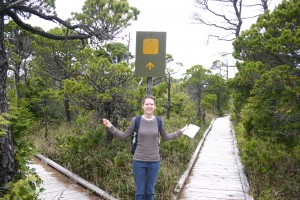 The next trail we went on was a much younger woodland and it looked completely different from the rest. 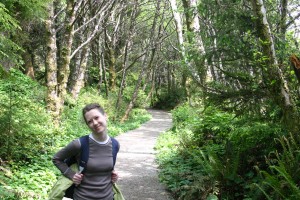 This trail led down to our first secluded beach. Curly immensely enjoyed tormenting any and all sea creatures that we found.  Especially these sea anemones. We couldn’t pass one without her finger poking it. 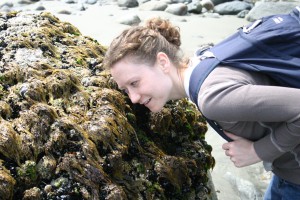 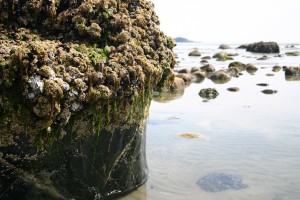 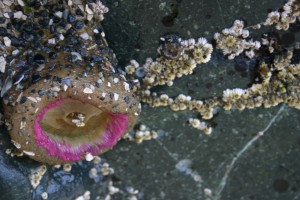 The beach ended with a spectacular island in a little bay. A great way to end this day’s adventures. 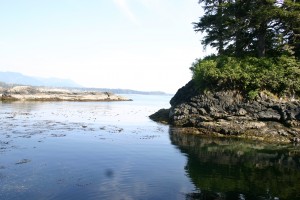 The next trail began as a restored forest and then opened up into a vast very old-growth area. 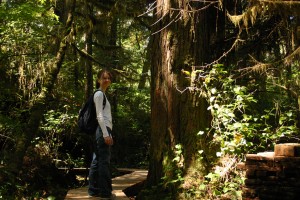 We thought that we had seen nurse logs before, but this one took the cake. 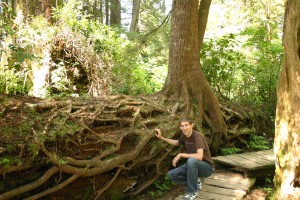 Gray Steel hit the100K mile mark, so we celebrated with fish and chips at Big Daddy’s Fish Fry. It was very good. 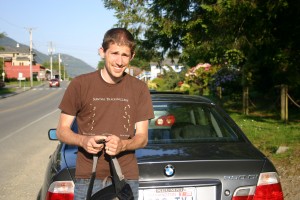 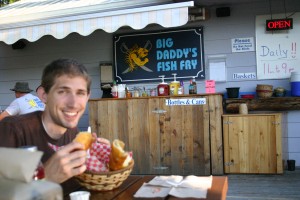 We ended our week of adventure in Canada by visiting a large park at the bottom of the island. It was a fantastic park full of wildlife and scenic views.  Bee likes to tell people that Curly almost got run over by a deer, but in reality she just saw a deer leap across the path about twenty feet in front of them. We also saw bald eagles, whales, and several tourists. 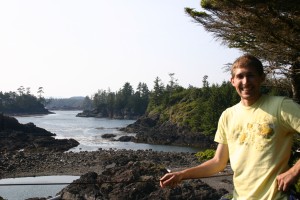 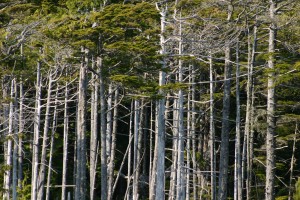 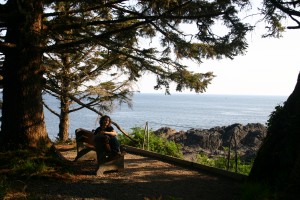 ← Sailing on the Sound
Attack Spider →