So this story actually starts last summer. Perhaps you will find the humor in it, as Curly and Bee do.

One beautiful July evening, Curly arrived home from work and parked in her normal spot in front of the house (parallel to the road). Bee happened to be in the yard, so we stayed outside for a while and talked. Eventually the conversation turned to a garbage can that had been on the street for a number of weeks, which was rather puzzling. We thought it probably belonged to our neighbor, but they had a smaller can that they put out and pulled back in each week while the large can stayed on the side of the street. We went through our gate, onto the sidewalk to take a closer look at the mystery garbage can and noticed a group of young people getting into a car that was parked across the street. As we were inspecting the can for a house number, the young man who was driving started to back out of the spot. He got halfway across the street, at which point Bee and Curly both knew he would back into Curly’s car, par 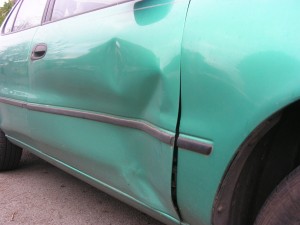 ked directly across the street. He was  going kind of fast and didn’t slow down or start to turn. He simply backed right into Curly’s car. We heard a few choice words as he moved his car and got out to talk to us and swap insurance info. They had been in a hurry to get on the road for a trip and he just wasn’t paying attention. The incident left a very large dent in the front passenger door of Curly’s car, which didn’t make her happy. Now, it should be mentioned that Curly doesn’t have a super-sweet ride, but it’s a great little car and she didn’t relish the thought of driving around a dented vehicle. When all was said and done, we found out it would have cost more to repair the damage than the car was actually worth. We decided to keep the money we got from the young man’s insurance company rather than fix the car. We’re saving for a new car anyway.

A week or two later as Curly was getting into her car as she was leaving the grocery store, she noticed a new dent a little further back on the same side that was now severely dented. Grrr. She was not in a good mood that night.

Fast forward 10 months. Bee came home from work on Monday feeling a little glum, because someone had tried to pry open the gas tank door to siphon gas out of his car. They weren’t successful, but left a few marks and chipped the paint a little bit. Bee loves his car. It truly is a beautiful piece of machinery. Grrr.

We joked that night about how Bee’s car seems to be targeted for malicious acts (his car was keyed a few years ago), and Curly’s car is a magnet for random accidents. So weird, but true.

The next morning, Curly and Bee woke up to a note on Curly’s car. Someone had accidentally backed into her car the night before (yes, the same night we had been laughing about how weird things happen to it). It was the driver’s side this time, and the young man was sweet enough to leave his name and phone number, asking us to call him. Compliments to his parents for raising an honest and responsible son. It would have been so easy for him to drive away without any acknowledgment of the incident. Good people are still out there.

We’re in the process of working with the insurance company. Maybe we’ll get some more money to add to our new car fund. 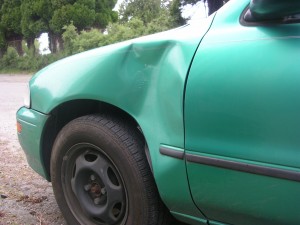 The moral of the story: It’s dangerous to park your car.

Edit: 4 days after this incident Curly noticed that yet ANOTHER dent had been added to her poor car.  Bee thinks that someone must be putting a “Hit Me” sign on the car whenever they leave the house.