A couple of weeks ago Curly bought three hosta plants to put in the front garden where she had pulled up a lot of unsightly, scraggly looking ivy. It’s a very shady spot, so the hostas should do quite

well there in between an enormous hydrangea and a large fern. We’d had a very busy Saturday, but she wanted to get them in the ground, so Bee offered to plant them while Curly made an apple crisp to take to the dinner we were having with Bee’s family (we were on dessert duty). She got started in the kitchen, and suddenly Bee came in and asked if she wanted to see them. He had them in the ground in ten minutes! Curly was quite impressed, as she thought it would have taken her at least half an hour to dig all three holes and plop them in. Hooray for Bee! Here’s a picture of our lovely hostas.

On Wednesday, Curly acquired an elephant ear plant (at least that’s what she was told it is) from a neighbor of the family she works for. Curly is a nanny, and she and the kids were playing in a neighbor’s yard on Monday when she noticed the very large plant growing in the corner. It must be said that their yard is beautifully landscaped and the couple does it all themselves. Someday Curly and Bee would love to have a big, beautiful yard like that one. Anyway, back on track! This lovely woman offered to have her husband dig some up for Curly to take home. Wednesday morning, it was sitting in their garden very near where Curly parks her car for work. Isn’t that the sweetest thing?

The weather got yucky and rainy that day and stayed that way for a few days, but today was beautiful and sunny. Time to plant the elephant ear! One problem. The spot that we decided would be best was right next to some of that horrid running bamboo we’ve told you about before. Knowing that given enough time, the bamboo would choke out Curly’s new plant, she set out to obliterate 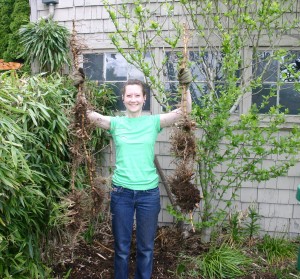 it from that particular little spot. Bee warned her that when he had tried to hack away a bamboo root, it actually bent his gardening tool. Not to be deterred, Curly put on her gloves and set to work. Using an ancient looking pickaxe that had apparently been leaning up against the garage for quite some time, she slowly dug up root after root. Running bamboo is tenacious stuff, and it sends out roots that grow parallel to the ground, about two or three inches down. Every so many inches, it send out a vertical shoot that grows up out of the ground, and that becomes a bamboo stalk. It was no simple task to dig these things up. Each line just keeps growing longer and sends up more stalks, and gets thicker, and tougher, and harder to dig up the longer it’s been there. The picture will give you an idea of what Curly was up against. That was just a small sample of what was in that small spot.

Bee was busy with other things, but he looked out the window a few times and smiled as Curly wielded the large pickaxe (she’s quite petite, but don’t be fooled by her size). It took a couple of hours to clear a spo 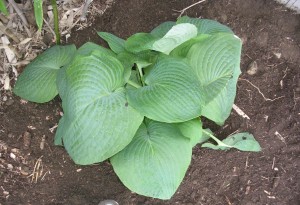 t that is about three feet square, but Curly was victorious in the end and their very large yard waste bin is now full of bamboo roots. Bee came out and helped tip the plant out of the pot and into the hole, because at this point Curly was tired. Those roots came out very grudgingly, and there were a lot of them. But we have an elephant ear plant there now! Looking at it now, it doesn’t seem like much, considering all the hard labor that was required just to dig the darn hole. However, it will get much bigger and hopefully fill in a large portion of the spot by the end of the summer. As long as we can keep the blasted bamboo at bay.