Curly decided to make peperonata today. It’s this wonderfully colorful Italian dish with lots of fresh vegetables that one of her brothers learned to make while he was living in Italy as a missionary over ten years ago. He probably only fixed it for the family one time, but it made quite an impression on Curly, because last December when she was assigned a vegetable dish for Christmas dinner with Bee’s family she thought of this one. Having never made it herself, she called up her brother for the recipe and made it for the first time on Christmas Eve for dinner that night. Talk about having faith in one’s cooking abilities! This may have been the first time Curly had cooked a dish for her in-laws, aside from the occasional batch of cookies, and obviously she wanted it to be quite tasty. Thankfully everyone enjoyed the peperonata that night. Well, almost everyone. Bee conveniently neglected to try it. He has agreed to give it a shot tonight, however. We’ll see what he thinks.

Curly’s favorite thing about peperonata is the vibrant colors. Eggplant, bell peppers, zucchini, basil, oregano, potatoes, tomatoes… it really is quite pretty. It starts out looking like this. 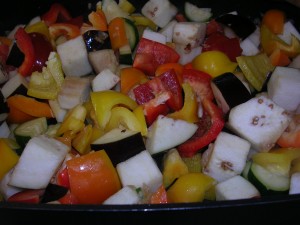 Then you basically cook it until it’s mush. And it ends up like this. 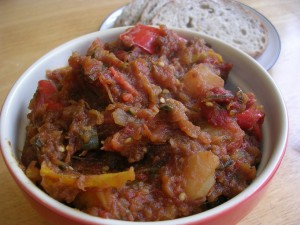 Curly freely admits that her brother’s peperonata is undoubtedly better than her own, since he actually learned to cook it in Italy from little old Italian ladies. But we can’t all be so lucky. Sigh.

On a side note, when Curly was younger she would get upset with her mother for putting green things in food. Green things being dried herbs. It wasn’t until her brother came home from Italy and requested fresh herbs to cook with that Curly realized (at age 18) that there is a huge difference between dried herbs and herbs fresh from the garden. She fell in love with cooking with fresh basil and rosemary and oregano and thyme, and even uses fresh sage now, much to her mother’s surprise. As a small child, she and her siblings would play outside in the acres of sagebrush on her family’s property, making forts and whatnot. Inevitably, sagebrush would get on her hands, and her hands would somehow find their way into her mouth. Let’s just say sagebrush is not a tasty treat. Consequently, Curly associated sage with sagebrush and therefore did not like the taste of it. She expressly forbade her mother from cooking with it.

Now Curly has her own herb garden, which includes sage.