Since Curly and Bee have been somewhat neglectful of their blog-posting duties since the end of June, we’ll give you a quick summary of the past month. Unfortunately, their aren’t many pictures to accompany this post, since Curly doesn’t have a fancy phone that allows her to transfer photos and she either forgot her camera or batteries when photo ops presented themselves. Grr.

We’ll start with the food, since that seems to be a common theme in our blog. Curly and Bee had been given a gift certificate, from the family she works for, to a cozy little restaurant called Pair (http://www.pairseattle.com/ 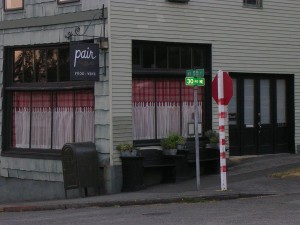 ). This was the second such gift, so we were very excited to sample more food from their unique menu. The dishes are intentionally small, so you order four or five things between the two of you and share it all. We have found that the frites are better than any french fries you will ever have, and the fontina mac and cheese is to die for (as has been mentioned before, Curly has an appreciation for really good macaroni and cheese). We also tried the Natural Beef Briskets this time, which looked like miniature hamburgers. Very good if you like horseradish, which Bee does and Curly does not. Curly has a cute picture of Bee on her phone of him eating one of his tiny little “burgers” and would love to share it with all of you, but is at a loss at to how to get it off her phone. Anyway,  Pair is a lovely restaurant, and we would definitely recommend it.

On July 3rd, Bee and Curly were in charge of putting on a church pancake breakfast for 200 people – an overwhelming task! We had never done anything on this scale before, and Curly was stressed out. We had two other people on our committee, but Curly figured it would be easier if she and Bee planned and shopped for all the food (leave nothing to chance…). We decided to keep it simple by serving pancakes, syrup, fresh strawberries and blueberries, whipped cream, and sausages. The fresh fruit was the one thing Curly was prepared to stand her ground on, even though it would be the biggest expense, next to the sausages. Mmm… fresh strawberries and whipped cream on pancakes! She figured the fruit would also give those individuals who are careful about sugar a nice alternative. The best strawberries in the Seattle area are from Spooner Berry Farms, which is a family owned berry farm in Olympia. They pick them daily and sell them ripe and ready to eat at their berry stands, one of which is just down the street on 35th Avenue NE, next to the Wedgewood post office. We love the fact that we get to support a local farm when we buy their berries, and they literally are the best berries you will find in Seattle (http://www.spoonerberryfarms.com/).

OK, back to the pancake breakfast. Curly happened to have the Friday before off, so she purchased 5 flats of strawberries, then went to Costco and Cash & Carry to do the rest of the shopping, went to the church to set up as much as she could on her own, went to her doctor’s appointment, had dinner with Bee, then they both went back to the church to finish setting up tables and chairs, stopped off at Bee’s parents’ to borrow their electric skillet, then back home to cut up strawberries (our other two committee member were missing in action). We were at the church at 7:00 the next morning to start cooking. Amazingly, everything went so smoothly. We had cooked plenty of pancakes ahead of time (there were four of us in the kitchen), so the line moved quickly and we just kept cooking pancakes and bringing food out until everyone had as much as they could eat. The fresh fruit was an enormous hit, and people were raving about how good the strawberries were. Our church does this 4th of July pancake breakfast every year, with mixed results. We were told over and over that this breakfast was the best one ever! Yay!

We cleaned up and went home and took a three hour nap.

On July 19th we were given tickets to the Mariners baseball game by a family that we know. They were awesome seats! Three rows back from the 3rd base line, right over the visiting team’s dugout. The weather was perfect, the seats were great, and the Mariners lost. Oh well. We kept ourselves entertained by watching the people around us. There was a man sitting directly in front of us who looked very familiar to Curly. Probably in his late 20s to early 30s. Did he look like a famous actor, perhaps? Bee thought he looked like Kevin Bacon, and Curly voted for Mark Hamill (Luke Skywalker). Curly was going to take a picture of him so we could put it on our blog and have all of you vote, but alas, the batteries in her camera were dead! So sad. In the end, though, she realized that he looked a lot like this guy she used to see around at church a few years ago. Not quite as exciting.

On a whim, Curly decided to stop off at the Spooner Berry Farm stand for a flat of raspberries to make freezer jam a couple weeks ago. Again, the best berries in Seattle! 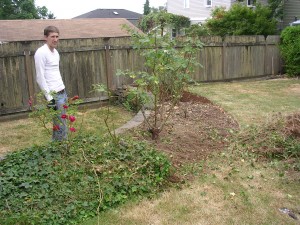 Over the last two weekends we’ve tackled a project in our yard, and were quite happy to finish it on Saturday. Our yard has a small garden with a hydrangea, fern, and the hostas that Curly and Bee planted back in May. There was also some scraggly looking ivy that we didn’t like. We also have  an arc-shaped rose garden that was overwhelmed with ivy, choking out the roses. It appeared that originally there was no ivy, and the garden was just covered with bark, so we decided to pull out all the ivy. We knew that the ivy would be a pain in the neck to remove, but it was worse than we were expecting.

Bee was exhausted after he spent about two hours hacking away at it. 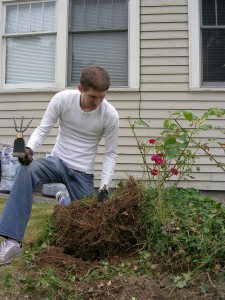 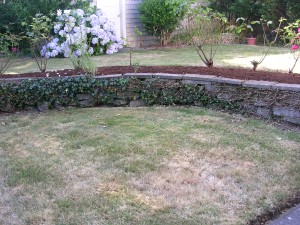 But he was victorious in the end. 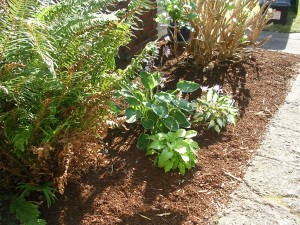 Our hydrangea had also reached epic proportions, so Bee trimmed that back quite a bit. It looks sad now, but it should bounce back in the spring.