It just so happens that Bee’s brother and his wife and youngest child are here on vacation from Ohio (the other four children are with their other grandparents in Chicago having a marvelous time!). We’ve been enjoying spending time with Bee’s family, since they so rarely are able to all be together. Last night we went out to dinner at Ivar’s Salmon House (http://ivars.com/index.php?page=locations_salmonhouse) for a leisurely two-hour dinner of fine seafood. Curly would highly recommend the halibut, but Bee discovered that seafood is the house specialty. We had eaten a lot of fish lately, so he wanted to try something different, but he ended up finishing Curly’s halibut while she ate some of his chicken. It was a lovely dinner with good company and enjoyed by all eight people in attendance. We would like to send out a big “Thank you!” to Bee’s parents for treating us to such a nice evening.

Apparently every year Seattle has this large festival called Seafair, and one of the events is Fleet Week (http://www.seafair.com/events/fleetweek/), during which we pay tribute to the men and women of the U.S. Navy and Coast Guard.  Several American and Canadian (yes, Canadian) ships dock in Elliot Bay and 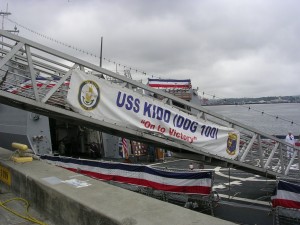 invite the public on for free tours. This was the first year that Curly was aware of this tradition, so she informed Bee that she would like to tour one of the ships, and invited Bee’s family to come along too. It turned out that just Bee’s brother, his wife and their adorable four-month old daughter were able to come, so we set off to Pier 66 early this morning to beat the crowds. We toured the USS KIDD (DDG 100), which is a large Navy Guided Missile Destroyer. Very large. Very impressive. 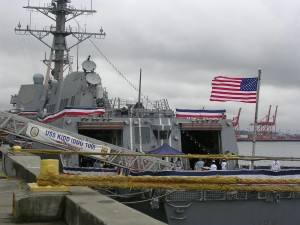 The tours were led by Navy officers who work onboard the ship, so we got some neat insights about the operation of the USS KIDD and some fun sea stories along the way.

Touring a US Navy vessel isn’t something you get to do everyday, so we were all glad we had the chance. Here are some of the pictures we took.

Curly and Bee standing beside the USS KIDD (DDG 100). 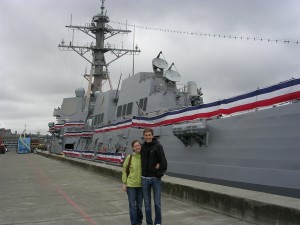 Q and Lou with their daughter. 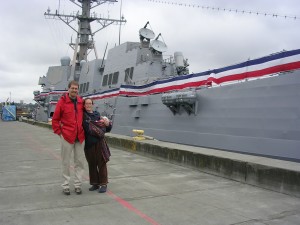 The mast of the ship, with one of our tour guides. 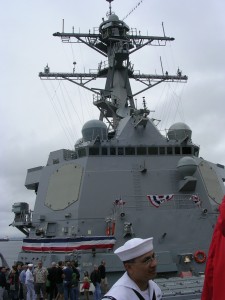 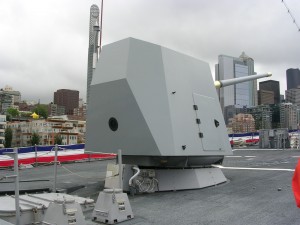 These doors open up so things can be shot out of them. 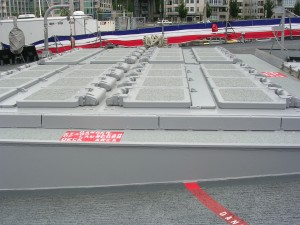 There was a red circle around the firing area. Apparently when the personnel hear certain alarms they know to get the heck out of the way, or they’ll get singed! 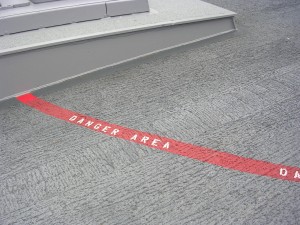 “Don’t Tread on Me” flag that flies at the front of the USS KIDD. 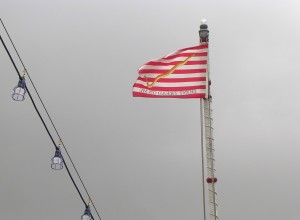 Although the ship itself is rather large, it was not necessarily built to accommodate very tall people. This is Q going through one of the doors. In hindsight, we wish we had gotten a picture of Curly going through a door to show the contrast. Sigh. Q is very tall! 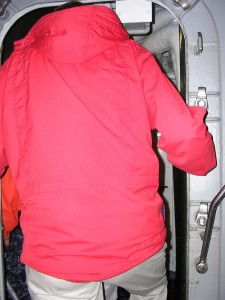 Throughout the ship there are handy maps telling you where you are. 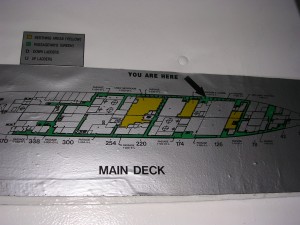 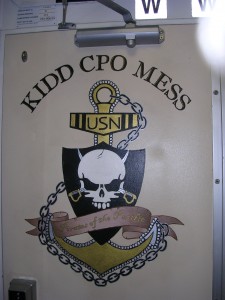 Our tour guide telling us about the mess hall. Apparently the food leaves much to be desired. 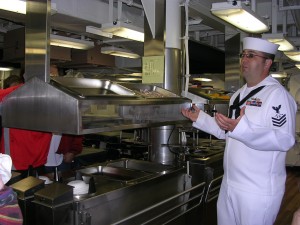 This is a poster that was hanging up near the mess hall. Unfortunately, Curly didn’t have time to turn off the flash. We were moving pretty fast onto the next spot. 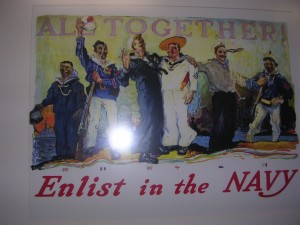 This is the back of the ship, where we started and ended our tour. 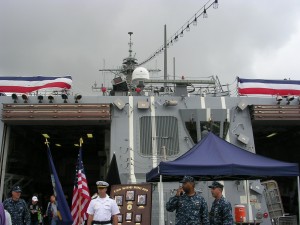 There were U.S. Coast Guard boats patrolling the water around the USS KIDD. They looked pretty dinky compared to the large destroyer vessel they were there to protect. Q asked about them, mentioning one might think it was a silly thing to have such small rubber boats guarding an enormous ship. Our guide said they’re really there as a first warning for any other boats that might get too close, letting them know they need to back off. 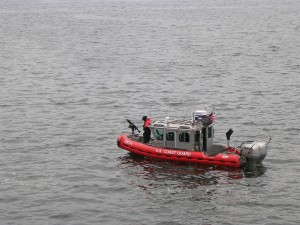 The security gate that everyone has to pass through to get onto the ship, and walk by as they are leaving. 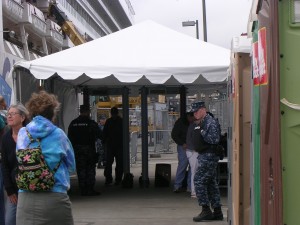