Curly got an email from her mom today with pictures of her orchid that has finally bloomed. She is so excited about it! That email prompted Curly to finally write this post – something she has been meaning to do for weeks. Thanks, Mom! 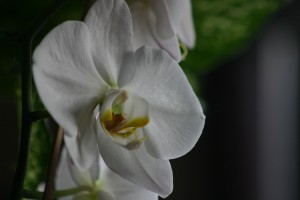 About a month after Curly and Bee started dating, Bee gave her a beautiful orchid for Valentine’s Day. It was in full bloom with splendid white flowers that were four inches across. Apparently Bee’s mom also thought it was a magnificent plant, and suggested to Bee that she could keep this one and they could find another one for Curly! She has grown orchids for quite some time. But Curly ended up with the orchid (as well as some delicious Dilettante chocolate truffles and a scrumptious Italian dinner). It was a good Valentine’s Day.

That was two and a half yea 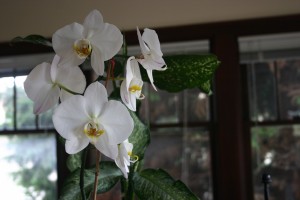 rs ago, and after those flowers faded and fell off, it was just a lovely green plant for a long time. Eventually it started growing air roots, but didn’t blossom again. One day Bee’s mom asked Curly if she was feeding her orchid, when it was mentioned that it hadn’t bloomed since she had gotten it. Nope, she wasn’t. So she started giving it orchid food and it started growing a stem for blossoms! Yay! And once it started it grew rather quickly. The buds opened up several weeks ago, and we ended up with six beautiful flowers.

Here are some pictures of the orchid. It sits next to a moderately sized dieffenbachia, with large green leaves which you can see in the pictures. We would have moved the orchid to take some photos, but the air roots have grown around the cast iron plant stand, so it was safer to leave it where it is. You can see the air roots at the bottom of the photo below on the right. 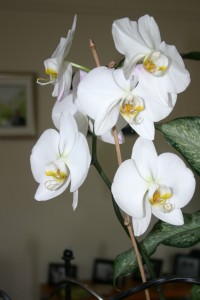 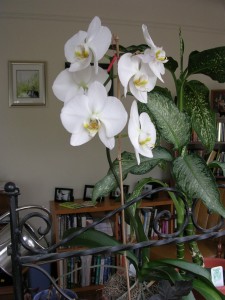 Moral of the story: Feed your orchid. It’s probably hungry.