Curly is fully aware that the majority of the posts on our blog have a lot to do with her. What does that say about her? Hmm.

Well, this post is, again, about Curly. She and Bee had been kicking around the idea of buying her a bicycle for quite some time, so she could ride the mile and a half to work instead of driving the five minutes it takes to get there. Exercise! Yay! Truth be told, it had been years since she had ridden a bicycle, and she wasn’t sure she was going to love riding at 7:30 in the morning, but she was pretty determined to try it out.

So last month Bee took her to REI to look at some of her options. Now, it’s important for our readers to understand that Curly is a petite woman (5 feet 2 inches, to be precise) which means she needs a petite bike. They make petite clothes, but who’s ever heard of a petite bicycle? They don’t make those, right?

YES, they do! And REI sells such a petite bicycle! And it was on sale! And helmets were on sale, too! And Curly is married to a kind, sweet man who encouraged her to buy it!

So, they did. And a light blue helmet. 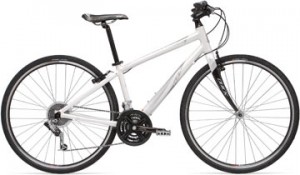 It’s a Cannondale Quick 4 Feminine (size: Petite). We don’t have any pictures of Curly on it yet. We plan on fixing that.

Now when Curly arrives at work in the morning, the adorable nearly 2 year-old that she takes care of asks her if she rode her bike (“Re-Re bike?”). Then she asks, in a very serious manner, if she wore her helmet (“Helmet?”). She also likes to help her put the bike in the garage, and see her off at the end of the day. Who knew a bike would be so exciting?

We’ll see how much Curly likes to ride her bike when the rainy season hits. But in the meantime, she’s loving it!

← Reason for Visit: Laceration (cut)
James at The Showbox →