One of the reasons locals like Seattle so much is the relatively mild weather. Sure, Seattle gets a bad rap for the rain and all, but in reality it doesn’t rain as much as is commonly thought. The past few years, however, have given us a few surprises as far as weather goes. In fact, it seemed to start the year Curly moved to Seattle (2006). That fall we hit a new record for the longest stretch of consecutive rainy days (somewhere around 30, if memory serves), and then winter hit, bringing one of the worst snow/ice storms in recent Puget Sound area history. Welcome to Seattle!

The weird weather trends have stuck around. For example, the past two summers brought scorching temperatures (high 90s in Seattle is hot, since no one has AC) mixed in among days in the high 60s.

Now it’s fall again and we have several inches of snow with a current temperature of 21 degrees. Sigh. Seattle really isn’t equipped to handle snow, since we so rarely get it.

On the bright side, we’re both home from work today. Bee’s working from home, and Curly just has a snow day. 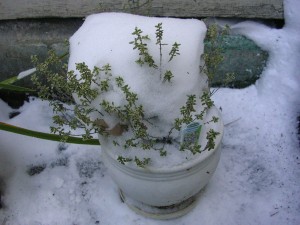