You Better Belize It! Day 1

We needed to get out of town for a while, so we decided to go to Belize. How did we decide on Belize? We wanted to go somewhere that had a lot of history or natural wonders, and it had to be warm. Turns out that Belize has all three, and I have a friend who went with her husband and had a great time. Great! Let’s go to Belize.

Bee kindly left all of the planning to me. Thanks babe!

We were gone for a total of nine days (including travel), so I’m going to do a blog post for each day. Hopefully that will make it more manageable for me, and prevent you from feeling like you’re reading a novel. We have about three gigs of photos, only a small portion of which will make it into each post. I’ll just say right now that Bee is the better photographer, but I took most of the pictures that chronicle our trip (where we stayed, ate, our surroundings, etc). Consequently, when you see an amazing photo, Bee probably took it with his camera (but I did manage to snap some great shots!).

My brother who lives just down the street volunteered to take us to the airport at 4am on Thursday, March 31st. He’s a saint and we love him. Actually I think his wife offered first but wasn’t sure she would be cognizant enough to drive at that hour, so we love her dearly too. So we threw our backpacks into the trunk and started our adventure!

On our flight from Dallas to Belize we sat next to a very nice man who works for a company that arranges tour groups (I think that was the gist of it), and he had been to Belize one or twice before so he gave us some pointers and general info about the country. Actually, he and I started talking while Bee was reading and eventually I pulled Bee into the conversation. Bee would say that this was the first of many times that I would be chatted up during the trip. He kept track.

This sign was at the water taxi office. I love the use of military time and am/pm!

We exchanged some money at the bank at the tiny Belize airport then took a taxi into Belize City to catch the water taxi to Caye Caulker, the island we spent the first two nights of our trip on. It seems like anyone who has a car in Belize is a cabbie. This does not mean, however, that one must have a nice car or be a stellar driver to be a cabbie. Belize drivers are scary. Pedestrians and cyclists may have the right of way by law, but not in practice. Stop signs are optional. It’s perfectly acceptable to pass on a scary two lane road on a blind curve. Roundabouts are a free-for-all. I could go on. We made it to the Caye Caulker Water Taxi in time for the last boat, and found ourselves packed in like sardines for the hour and a half trip to the island. The guy sitting next to me struck up a conversation (this was the second time in one day Bee would claim I’d been hit on) and he very graciously offered to switch seats with Bee so we could sit together. 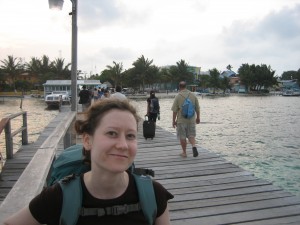 Curly on the dock upon arrival on Caye Caulker

We were greeted on the dock by a young man who drove us to our cute little house in a golf cart. Golf carts and bicycles are the only forms of transportation on Caye Caulker – well, that and walking, which did for the rest of the time we were there. We had the top story of a nice little house (very nice compared to what most of the locals live in) with stained glass windows and an air conditioner in the bedroom. 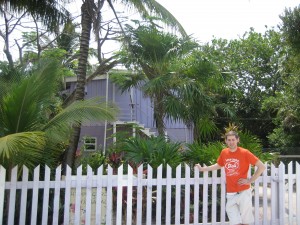 This was our home in Caye Caulker 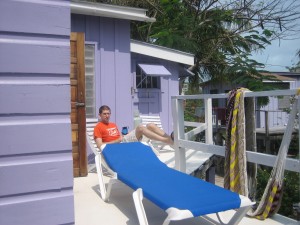 It had a nice deck in the back. 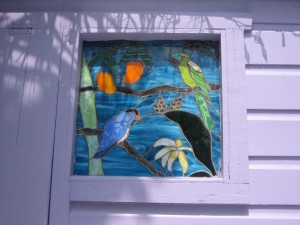 Stained glass window from the outside. 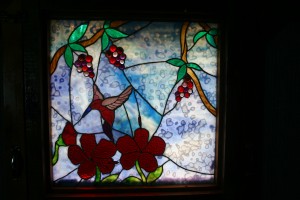 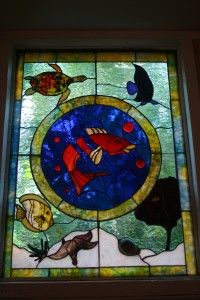 After getting locked out of our sweet little place, we walked into the main part of town to find the woman from the rental office and then had some dinner. Bee would tell you that I was getting to the point of being “mad hungry,” so food was of great importance at this point. On our walk back to the house we talked about the apparent poverty we had already seen during our first day in Belize and wondered what we had gotten ourselves into. It’s very different from the comfortable lifestyle we are accustomed to here in the US. On a lighter note, we also noticed these awesome palm trees! They look like fans. 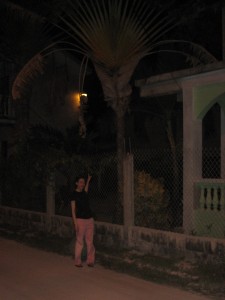 Curly and an awesome tree. 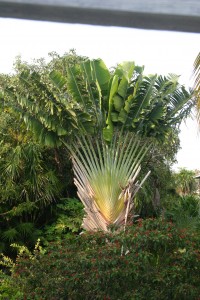 A much better picture of a palm tree that fans out.

← Pie and Doughnuts
You Better Belize It! Day 2 (Caye Caulker) →