You Better Belize It! Day5 (ATM)

On Monday (April 4th)we went to Actun Tunichil Muknal (known as ATM), which is a 3-mile-long cave in the northern foothills of the Maya Mountains, and it is filled with ancient Maya artifacts and human remains. We were told it was not to be missed, and indeed, it turned out to be a very memorable experience.

After driving 30 minutes down an obnoxiously bumpy dirt road we had an easy 45-minute walk through the jungle, which required that we cross the river three times (the trail zig-zags). We had two guides for this tour, a man who has a wealth of knowledge about the ancient Maya and this particular cave, and his nephew. The nephew is studying to be a medicine man in his village, so he pointed out various medicinal plants and other interesting things along the way. While we were crossing the river for the last time a young iguana dropped from one of the trees and swam to a log. Our guide said he was quite young, because he was bright green. The cute little thing was very patient during its photo shoot. I have to take credit for these photos, because I’m so pleased with them! 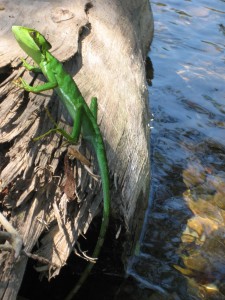 It stayed so still while we took pictures! 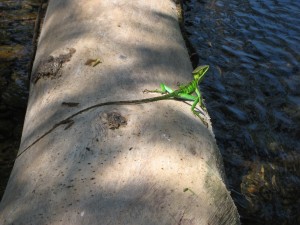 Then it changed positions so we could see all of its tail. The mouth of the cave.

After that it was a short walk to the opening of the cave, where the guides packed our cameras in a waterproof bag, gave us headlamps for our helmets, and told us to swim across the 15-foot pool to the inside of the cave. The water was shockingly cold, but our guide insisted that it was refreshing! Then we waded through water, the level of which was sometimes up to our chests, climbed up, down, and over rocks, twisted and turned to fit through small passageways, looking at beautiful stalactites hanging from the ceiling and stalagmites growing up from the floor. Some of these formations shimmered as if millions of tiny diamonds were embedded in them. In the words of our older guide, it was amazing! Finally we came to a large opening where we took our shoes off to protect the artifacts from the oils and bacteria of our feet. We were greeted by hundreds of shards and pots, as well as the partial remains of 13 humans (seven of them children), all believed to have been sacrifices from the ancient Mayas. About a mile and a half into the cave we saw the full skeleton a a woman (bringing the human count up to 14) who was probably around 20 years old when she was brought to the cave to be sacrificed. It was not hard to imagine that the people who died in ATM did not have peaceful deaths. As Bee and I talked about it later, we found that while we respected the cave for the history that is preserves in it, we have a hard time treating it as sacred, as our guides did, simply because we don’t agree with what happened there. That being said, it truly was one of the most memorable adventures either one of us has ever had, and we’re lucky to have had the chance to experience it. On our way back out we took a slightly different path that involved a bit more skill and maneuvering. At one point we had to immerse ourselves up to our shoulders then slide our necks between two rather sharp rocks that jutted out, leaving just enough room for our heads to fit through above them. Eek! There were a couple of times that our guides had us turn off our headlamps and we sat in total darkness (the likes of which I haven’t experienced since I was in a coal mine in Wales several years ago, and had hoped would never experience again). By the end, I think we were both glad to be outside again. I think this is a stalagmite. To be quite honest, it's hard to tell the difference once their in picture form. If you enlarge this picture you can see the shimmery material in the formations. Click on it to make it bigger. So lovely! Our guide took some pictures for us in ATM. 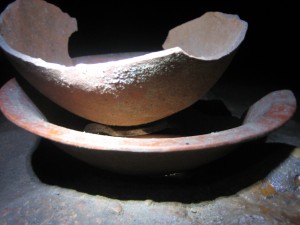 Our guide pointed out this stalagmite, because it looks like a candelabrum. A cricket that lives in the cave. Our guide took this photo for us. This huge pot was way up high on a shelf-like ledge. It's amazing that tge ancient Maya were able to carry the pot so far into the cave and then get it up so high.

This is a complete skull. He has a flattened forhead and filed teeth, which means he was part of the upper class. She is thought to have been a virgin sacrifice, and is the only complete set of human remains. The cave is named for her; Actun Tunichil Muknal means Cave of the Stone Sepulcher. Her skeleton is encrusted in calcite. This photo is a little bit soft, but I like it because the shape of the pot is beautiful and it has a monkey on it. Looking at some pots.