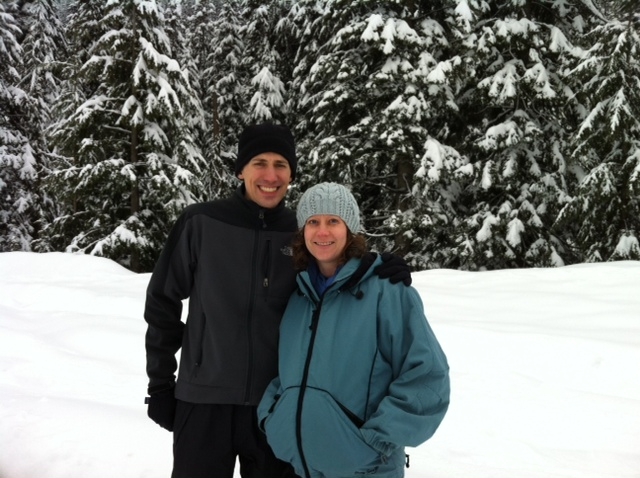 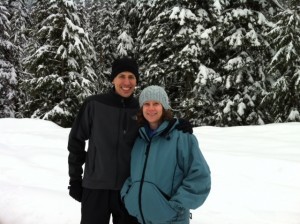 My brother Neil and his wife Courtney wanted to take their one year old daughter to the mountains to play in the snow (for the first time, I think) and invited us to come along with them today. I dug out a snow suit that I inherited from the wonderful family that I worked for up until a week and a half ago (they gave me all the baby gear and little girl clothes they don’t need anymore) and we set off to the mountain pass.

When we got there they realized they didn’t bring any shoes for Ezra so we improvised. First she had on her dad’s gloves with plastic bags tied on over them to keep her feet dry, but they didn’t stay on very well. Then I realized that my gloves cinch up around the wrist and across the back of the hand, and are also waterproof. They stayed on her feet much better and kept them nice and dry. Ezra looked like a funny little monkey, but she did an amazing job walking around.

Video of Ezra with gloves as shoes.

She had a great time playing until she got cold and hungry, at which point it was suddenly game over and we headed back to the car. She had a snack and all was right in the world again.

On the drive home I was giving her some cheddar bunny crackers to munch on, and eventually she took one and hid it under the blanket that was on her lap, then held her hand out for another. Bee fished the cracker out and handed it back to her and she promptly put it back under her blanket and held her hand out again. I gave her one, which ended up with the other cracker in her secret stash. She was all smiles, and I think she knew it was a pretty funny little game she had invented and she kept it up for a little while. She’s so funny! We love living so close to them and seeing them so often. Thanks for a good afternoon! 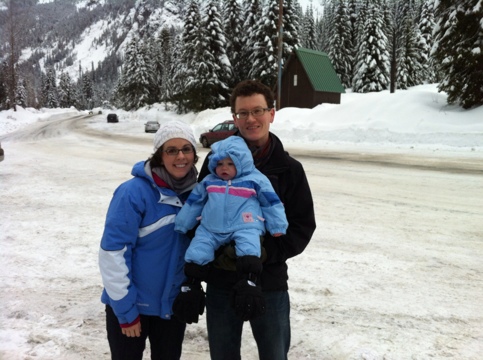