Sand Between Her Toes

We took T-Bone to the waterfront here in Edmonds (did I mention we bought a house and moved?) and put her feet in the cold water for the first time about a week ago. She was fine with the water that was higher on the beach, as seen in the picture, but didn’t like the water that was rolling in from the Sound – that was much too cold! 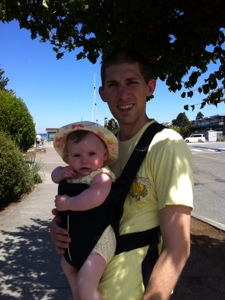 She turns 6 months old on Thursday, and we can hardly believe it!

In the past 2 weeks she’s become an expert at rolling and pulling herself around in an army crawl so she can get to just about anywhere she wants now. It won’t be long before she figures out how to do a full-on crawl and then we’ll be screwed!

She loves real food (thank you Baby Led Weaning!) and mealtimes are much more enjoyable now that she can sit in her chair and join us with food of her own. No purees or spoons. Just real food she can pick up and taste and figure out.

She’s also decided that sleeping through the night is not something she wants to do (that started 2 months ago)and naps are optional. Mom disagrees.